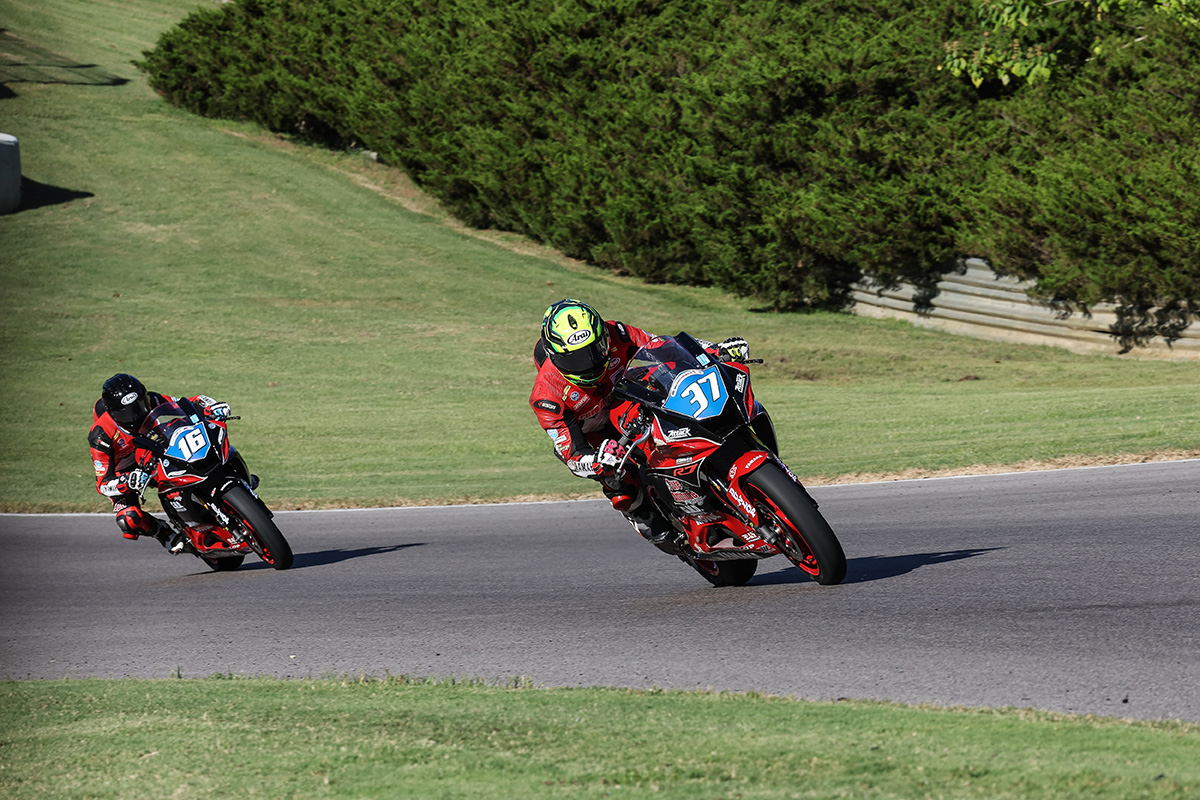 Pure Attitude Racing head into the winter break, proud of their achievements in the second half of the 2022 MotoAmerica season. After a difficult start, the entire team continued to work together, returning to the top ten of the Twins Cup thanks to the combined efforts of Liam MacDonald and Trevor Standish, who maintained their focus throughout the year. The team also had several front running performances with their Junior Cup rider Chase Black, including a front row start.

The final round of the season took place at Barber Motorsports Park took place this past weekend with Chase racing to a best finish of seventh, while Liam bagged another strong finish in eleventh. Trevor narrowly missed a point scoring result in P17.

2022 may only just have ended but the focus for Pure Attitude Racing is now firmly on 2023. They will be announcing their plans in the coming weeks so stay tuned. Also watch out for ALL ATTITUDE, a documentary which takes you behind the scenes of life within the MotoAmerica paddock in a way never seen before. It is currently in post-production and will air soon.

Chase Black:
“Race 1 on Saturday was pretty good. Thanks to team and the changes they made I was able to beat the riders around me and was happy with the way I rode. I finished P11 on Sunday which was not where I wanted to finish but sometimes racing is like that. I want to thank Pure Attitude Racing for their support this year and all of my sponsors.”

Trevor Standish:
“I made a good start but lost a few places on the opening lap but then the red flag came out. A few people went down in the second start, and I was able to run a decent race. I am thankful to bring it home and end the season with a double finish for the team. I am not sure what the future holds but wherever I ride I will give it 100% as always. I want to thank the entire team for everything they have done, and to all our sponsors for sticking by us, especially with my injury. It’s time to reset for 2023.”

Liam MacDonald:
“I am happy to end the year with more points and another fight for the top ten. It’s annoying to be beaten at the line by 0.078s but I have to be pleased with how me and the team performed, especially in the last few races. We never gave up and continued to believe in the project and I am proud of what we achieved. I want to thank the entire team, Dean, Cyndy, Kent, Todd, Michael and want to say thanks to my team mate Trevor. It’s been a blast sharing the tent with you again this season.”

Dean Standish – Team Owner:
“What a ride. What a season. It’s been a rollercoaster that’s for sure and we have had difficulties, but I couldn’t be prouder of everyone that has been involved in this program this year. Our riders, Liam, Trevor, and Chase were professional throughout and we achieved some really good results along the way. We couldn’t have don’t it without any of our sponsors so a big thanks to them. Thanks to Michael for the fantastic job he does in promoting our team and to my wife for being my rock both on and off the track. We learned a lot and we will come back swinging in 2023. Thanks to MotoAmerica too for giving us such a great championship.”