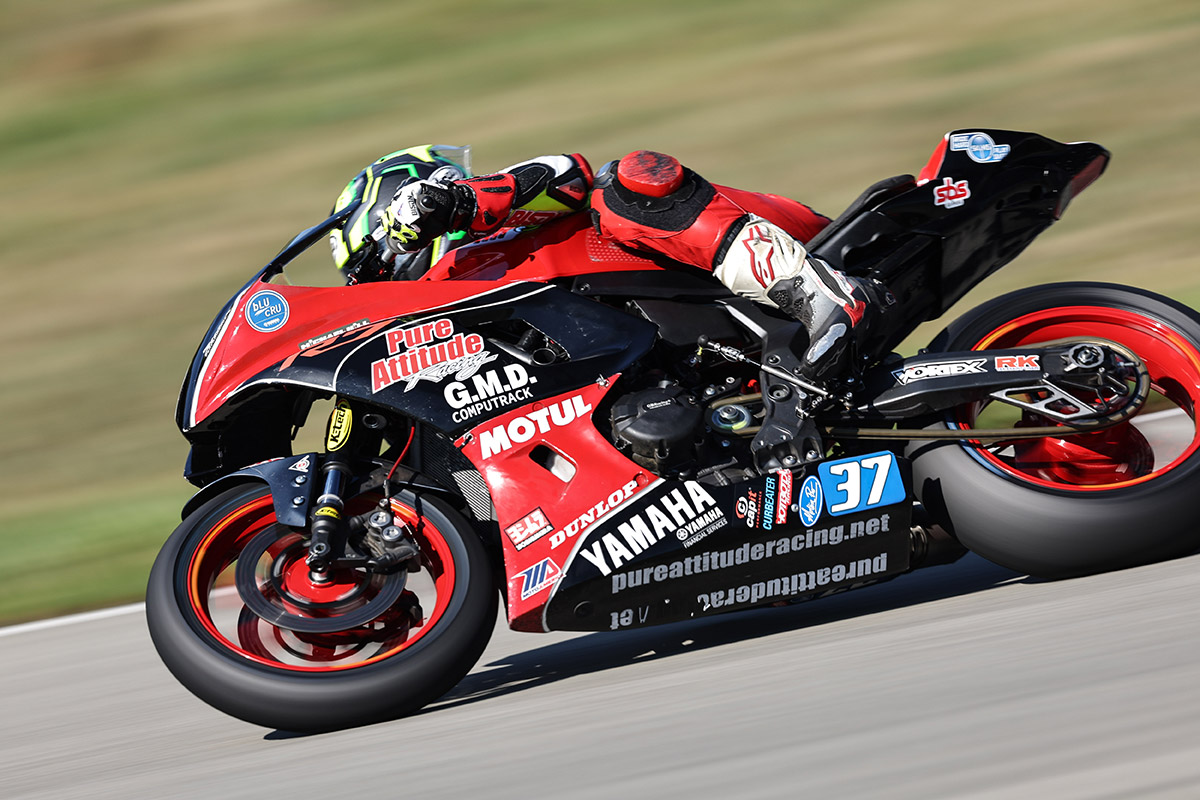 Pure Attitude Racing arrived at Pittsburgh International Race Complex looking to build on their recent successes in both the MotoAmerica Junior Cup and Twins Cup series.

The team’s Junior Cup rider Chase Black had an impressive weekend, qualifying strongly on Saturday morning before narrowly missing a maiden podium later in the day. He crossed the line sixth after a string of days laps ensured he ran at the front in the closing stages. He finished a solid seventh on Sunday.

Liam MacDonald was able to salvage points finishes – P15 and P14 in the Twins Cup double header. A spill on Friday morning limited track time and resulted in a trip to the local hospital before the #37 returned to the track for the two eleven lap races.

Passed fit after his Brainerd crash, the weekend was over before it began for Trevor Standish who was unable to compete due to ongoing technical issues that couldn’t be fixed trackside.

Brycen Stein, the team’s Academy rider made a welcome return to the paddock. He too suffered a technical issue in Free Practice before a heavy spill in qualifying cut short his weekend. He escaped serious injury which is the main thing.

In other news, 81-year-old Leon Standish – who still actively competes in flat track – was present at the event meaning all three generations of the Standish racing family were able to enjoy the eighth round of the MotoAmerica series.

Chase Black:
“Race 1 was honestly really good. I lost a bit of time in the beginning but once I got some clear track, I had some real pace and was able to catch the front group. I set the fastest lap at one point and just missed the podium. Race 2 was a little disappointing to be honest. My pace at the beginning is where I struggle and is what I need to work on because I just left myself with too much to do again. Nevertheless, we scored another solid bunch of points which is good for the overall position, and we can move on to the final four races happy enough with the weekend.”

Liam MacDonald:
“After the crash on Friday I am honestly glad to have been able to race. I made a great start on Saturday and was well inside the top ten, but I just didn’t have the raw pace or the energy. I dropped back a few places, and, in the end, I was able to cling on to fifteenth. I lost grip and was honestly happy to bring it home in one piece. Sunday’s race was a joke to be honest. There was an immediate red flag and then at the restart they held us for ever. There was so much confusion, and my clutch was fried. In the end they called the race after another red flag, and I scored a couple of points but honestly, I am frustrated as I don’t see how they can call the race after five laps of ten, but it is what it is. The team did a fantastic job, and I am looking forward to New Jersey.”

Trevor Standish:
“I was still a bit sore following my crash at Brainerd but thankfully I was declared fit for the weekend. Sadly, the lingering technical issues that have plagued us this season were unable to be fixed and so that was my weekend over. We will go back to the drawing board and be ready for New Jersey. It would have been a challenge anyway but the extra time to be 100% fit physically will be a good thing. “

Brycen Stein:
“I am obviously disappointed with the outcome of the weekend. We suffered a technical issue in FP1 and then I went down early in qualifying. I don’t remember much about the crash, but I want to thank Arai helmets and Bison Track for keeping me safe. Even though I couldn’t race it was fun to be back with the team and to take part in the various media activities. I look forward to being back on track soon.”