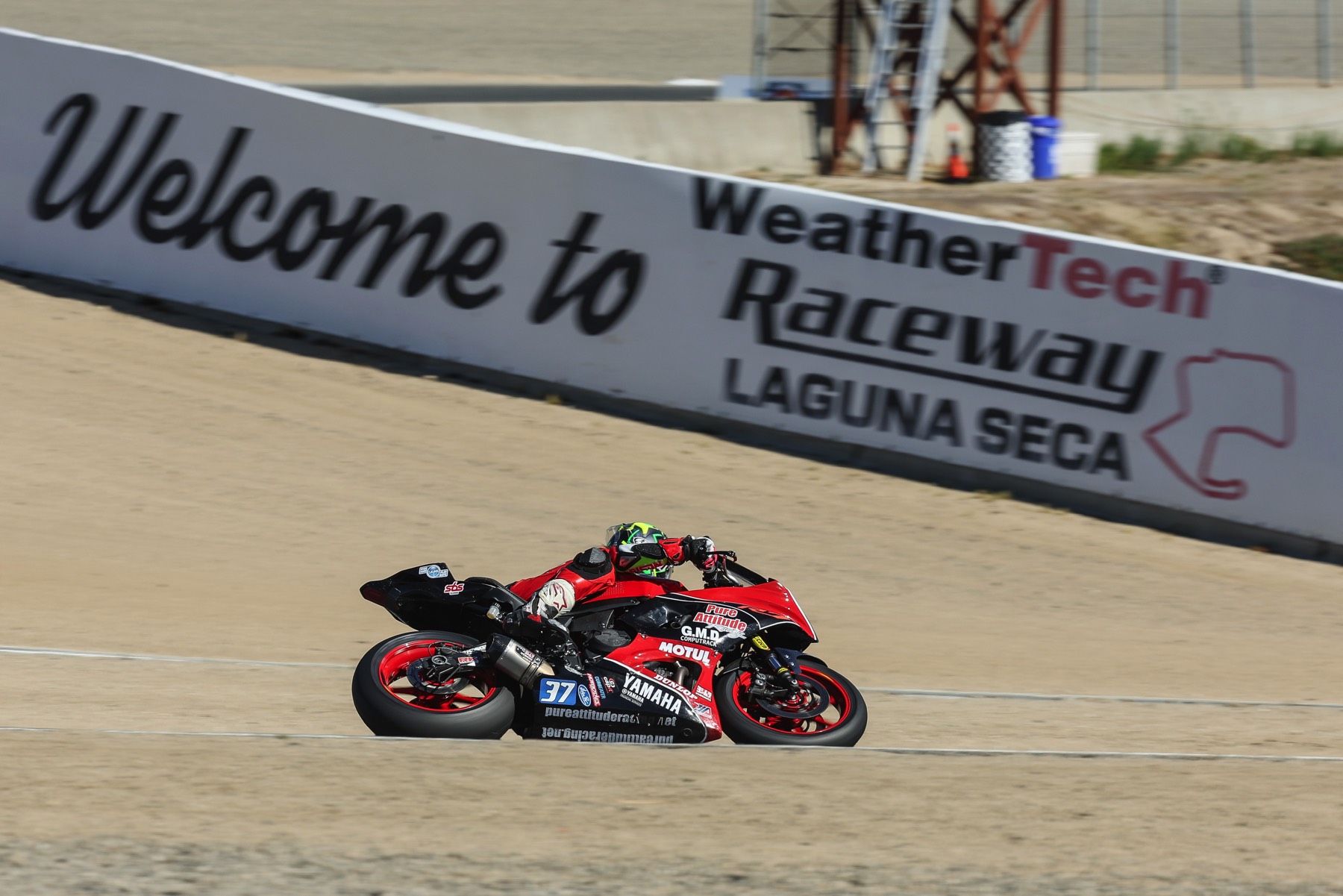 The Pure Attitude Racing team kickstarted the second half of the 2022 MotoAmerica championship at Laguna Seca this past weekend with riders Chase Black, Liam MacDonald, and Trevor Standish once again on track.

After receiving further technical support for the event from Yoshimura, who already supply the team with exhausts, the Twins Cup program was given a real boost as the series entered its second half.

Both Trevor and Liam continued their run of form, the pair qualifying well before contesting for the top ten in the early stages of the Twins Cup race on Saturday. Liam ultimately crossed the line in twelfth whilst Trevor was forced to retire with a broken gear linkage.

In Junior Cup teenager Chase Black also qualified strongly and showed podium pace in both races. A spill in Saturday’s opener after posting the fastest lap at the time was unfortunate but the youngster showed real determination on Sunday. A shortened five lap sprint following an earlier red flag saw the #14 once again close to the podium – he finished seventh but showed pace throughout.

Liam MacDonald:
“I am a little bit disappointed to miss the top ten but overall, I am happy. I had grip issues towards the end of the race, but I dug deep and was able to score another four championship points. I was involved in a good race with Trevor and a few other guys, and we were closer again to the front. It was great to be back at Laguna Seca and a ton of fun to party with the fans on Saturday night.”

Trevor Standish:
“I got a great start and was in the top ten immediately which gave me so much confidence. I was able to hang with them for a few laps and I think was running eighth or ninth but unfortunately, I had to retire when the gear linkage broke. I had crashed in Q2, and the team did a great job to fix the bike so we could race but the part that broke was not visible and it kind of sucked to miss out on a top ten as we should have had one in both races on the west coast. That’s how it goes sometimes. I will take it on the chin and head to Brainerd ready to fight.”

Chase Black:
“Race 1 was going well. I was in the lead group and had set the fastest lap when I went down. We could have had the podium but that’s racing. I was pushing hard and so on one hand I am disappointed, but I am happy with how I was riding. Race 2 was red flagged which for me was a good thing as it gave me time to reset and, in the restart, I was with the front group throughout. Perhaps if I was a little bit more aggressive, I could have finished higher than seventh, but I think we have shown that we are getting closer to being a front runner every race and that’s exciting for the rest of the season.”

Dean Standish – Team Owner:
“It was a couple of rough rounds on the West Coast but nevertheless we made progress and achieved our best results of the season. It was very humbling to have so many people help us out after the issues we had with Trevor’s bike at the Ridge. Yoshimura, who we are proud partners of, saved the day ahead of Laguna by providing us a motor for Trevor and helped us throughout the weekend with set-up advice. We were able to field a strong package with both of our Twins Cup bikes with Liam scoring points again. Unfortunately, Trevor had to retire due to a broken gear linkage. Despite this it was pleasing to see him and Liam fighting confidently for the top ten, something I am confident we can continue to improve on in the next few races. I am very happy with the job that Chase did. He cannot be disappointed with what he showed. Despite the crash he had when he was fighting for the podium he continues to develop and improve every race and he put in a very strong second race. Liam’s P12 means he has now moved up in the overall standings and has a real shot of the top ten.”