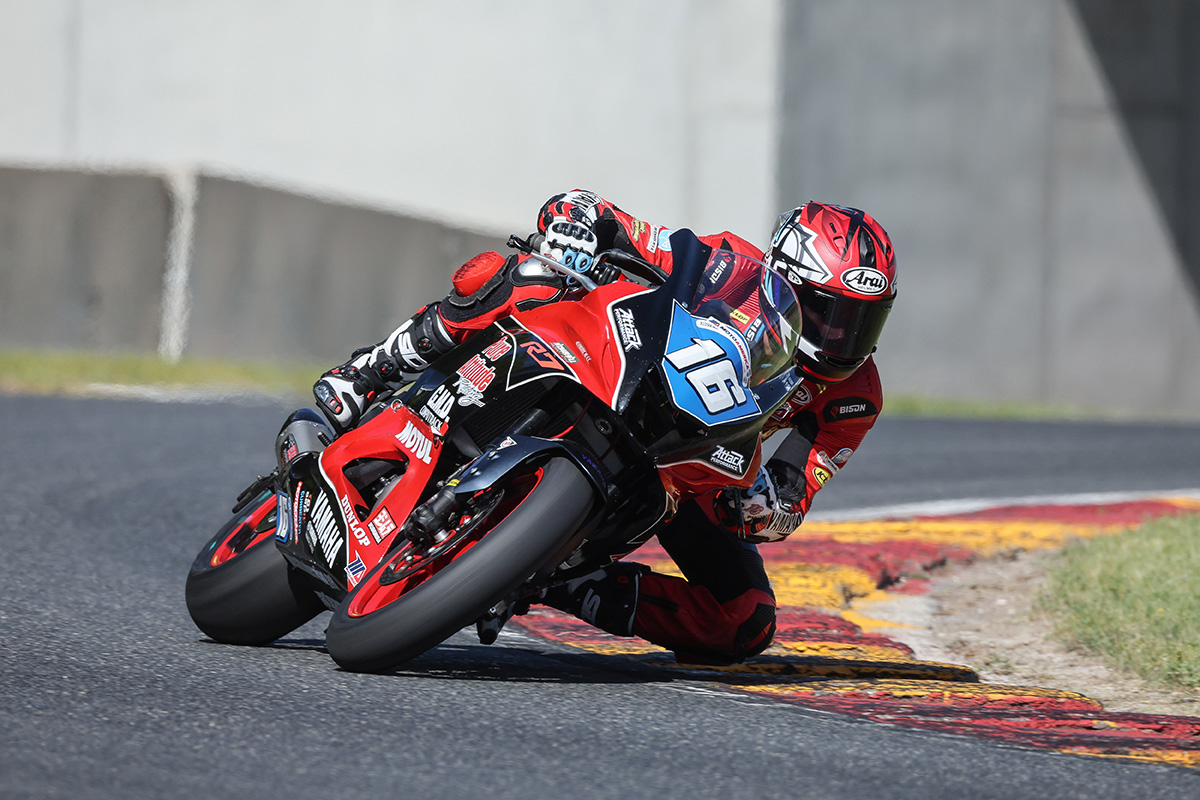 Pure Attitude Racing leave Road America, the venue for the latest round of the 2022 MotoAmerica Championship with all three riders Chase Black, Liam MacDonald and Trevor Standish claiming points in every race for the first time this season.

In Twins Cup it was Trevor Standish who produced the best result of the weekend, the #16 crossing the line in eleventh after a race long fight with several other riders, to achieve his and the team’s best result of the year. The result could have been even better had it not been for a shift linkage issue. Liam MacDonald once again proved he’s a fighter when the lights go out. The Kiwi battling hard from the sixth row of the grid to P14 at the flag, ensuring he has now scored points in all races since Daytona – an impressive achievement.

The Junior Cup championship is always a frenetic affair but as we saw in VIR, teenager Chase Black is developing his on-track skills nicely. Qualifying on row three he finished ninth on Saturday before riding a sensible race on Sunday as the rain began to fall around the four-mile Road America circuit.

The team was also more than pleased with the progress of their Academy rider Brycen Stein, who in only his second MotoAmerica appearance qualified mid-pack before bringing it home in a more than respectable twenty-seventh after a small mistake on the opening lap prevented what could have easily been a top twenty finish.

Trevor Standish:
“I was pretty frustrated after the race even after getting mine and the team’s best result of the year in Twins Cup, I honestly felt we could and should have been in the top ten. I wasn’t able to change gear properly right from the start and I am sure with the pace we had we could have been ninth. It’s all part of the learning curve and we know the issue. The team is working so hard to make us more competitive and we have a game plan to make life easier for both Liam and me. On the bright side we had more pace this weekend and we are getting closer every race. The bike handles like a dream and once we get those few extra horse powers, we can show our true potential on the Yamaha.”

Liam MacDonald:
“I am happy with the weekend. It’s the first time I think I have ever raced that hard in any championship. I was three wide with the people I was battling with and can leave Road America happy that I was riding well in the corners, we are just losing a bit on top speed which we knew before the weekend even began. The good news is that the team are working hard, and we were certainly more competitive here than we were at the start of the year, so I want to say a big thanks to them for continuing to push to find those extra ponies. I am quite excited for The Ridge as the bike will hopefully be even better and we wont need as much top speed there but I’m a racer and I always want to be at the front.”

Chase Black:
“Overall the first race didn’t go to plan. I was honestly hoping and expecting more. I made a mistake at Turn 1 on the opening lap and lost the group immediately. I gave it everything and so in the end had to settle for ninth. It was raining for Race 2 which was a good race and much better than I expected especially as I don’t have that much wet weather experience. I was in the fight for P4 but hit the white line and almost went down but I had so much fun and am looking forward to the next race in Washington.”

Brycen Stein:
“I felt good all race long. I could have the pace to run with the group ahead, but I made a mistake on the opening lap which left me in a battle with a couple of riders whose bikes were faster. It was a bit frustrating as I was much quicker in the corners. The bike felt good, and we finally got it to turn. It was a great experience being able to work with Pure Attitude, I am super happy to be part of their Academy program. They’re a great bunch of people and they definitely helped me this weekend. On one hand I am a little disappointed, but you can only do what you can do with the tools you have, and this is only my second ever race at this level, so I have to look at the positives, of which there are many. I hope to be back on the MotoAmerica grid before the end of the year and look forward to making more progress.”