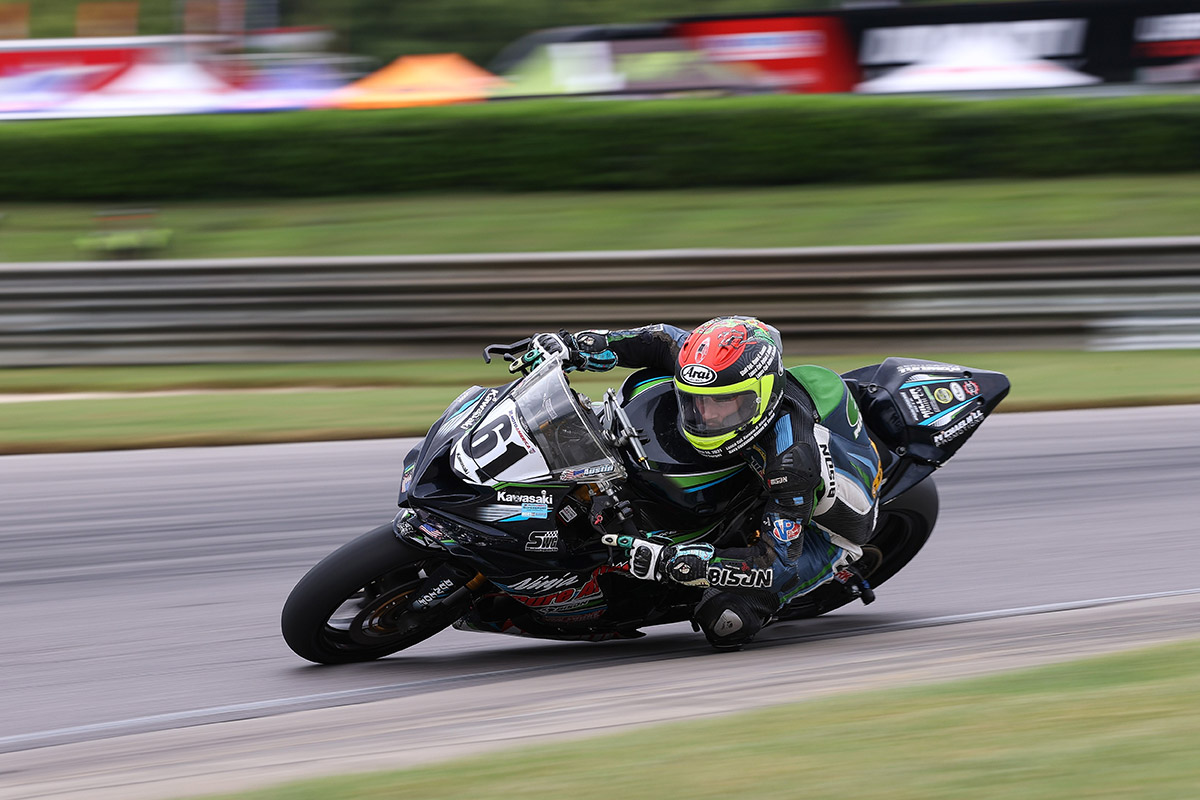 The highlight of the weekend was a maiden top ten in Supersport for Austin Miller who rode superbly in the pouring rain to finish P11 on Saturday before splashing his way to ninth on Sunday, matching the times of those ahead of him for much of the race.

Nate Minster was back on track after missing the last round in New Jersey because of school commitments. He retired from Saturday’s race, electing not to ride on Sunday.

In Twins Cup both Liam MacDonald and Trevor Standish revelled in the wet conditions. Qualifying on the third and fourth rows of the grid respectively, they quickly moved forward when the lights went out – Standish in contention for the podium before sliding out of the race in spectacular fashion. Running just behind Standish, MacDonald was promoted to fourth after running fifth before he too crashed with just a couple of laps to go.

Pure Attitude Racing wishes to take this opportunity to thank its riders, crew members, sponsors, and everyone at MotoAmerica for an amazing year. They will be announcing their full 2022 program, including their rider line up for next season shortly.

Austin Miller – 9th:
“I finally finished in the top ten. After being so close again on Saturday I was determined to make it happen in the final race of the season. The conditions were worse, but I made a good start but then fell back a bit. Once I settled down, I was able to go faster and me and Dominic (Doyle) worked together, and we passed the bunch of guys ahead of us. It was a great race, and I am so happy to finally make the top ten with a career best finish.”

Liam MacDonald – DNF:
“I was feeling really good this weekend and really enjoyed riding in the rain. They red flagged the race and because of the rain falling heavier the track conditions were different when we restarted. I had a couple of moments and took my time to find my rhythm and made some real progress. I was running fifth and then when Trevor went down that moved me into P4 but then I went down too. It sucks to be honest because once again I wasn’t able to bring it home in the position that we deserved but that’s racing, and I am excited to learn from this year and come back stronger with Pure Attitude Racing next year.”

Trevor Standish – DNF:
“The race started well, and I made a good launch off the line, but the bike didn’t feel right. I don’t know if it was running on one cylinder in the beginning, but something wasn’t right. The race was red flagged and we were able to find a solution and then in the restart I made another good start and was a lot more aggressive. I worked my way up to fourth and fighting for the podium but then I had an issue. I don’t know if I hit a false neutral and the RPM skyrocketed, and I went down. There was nothing I could do. It’s a bummer as we showed again that we had pace and it makes me even more hungry to get the job done next year”

Nate Minster – DNF/DNS:
“On the warm up lap it started to rain pretty heavy, so everyone ran wet tyres. I was doing ok, not super-fast but ok but I wasn’t feeling the setting of the bike and had no confidence, so I pulled in rather than risk a crash. On Sunday I decided not to ride based on the weather being the same and how I was feeling. I want to thank the team for all they have done this year and for supporting my decision not to ride.”