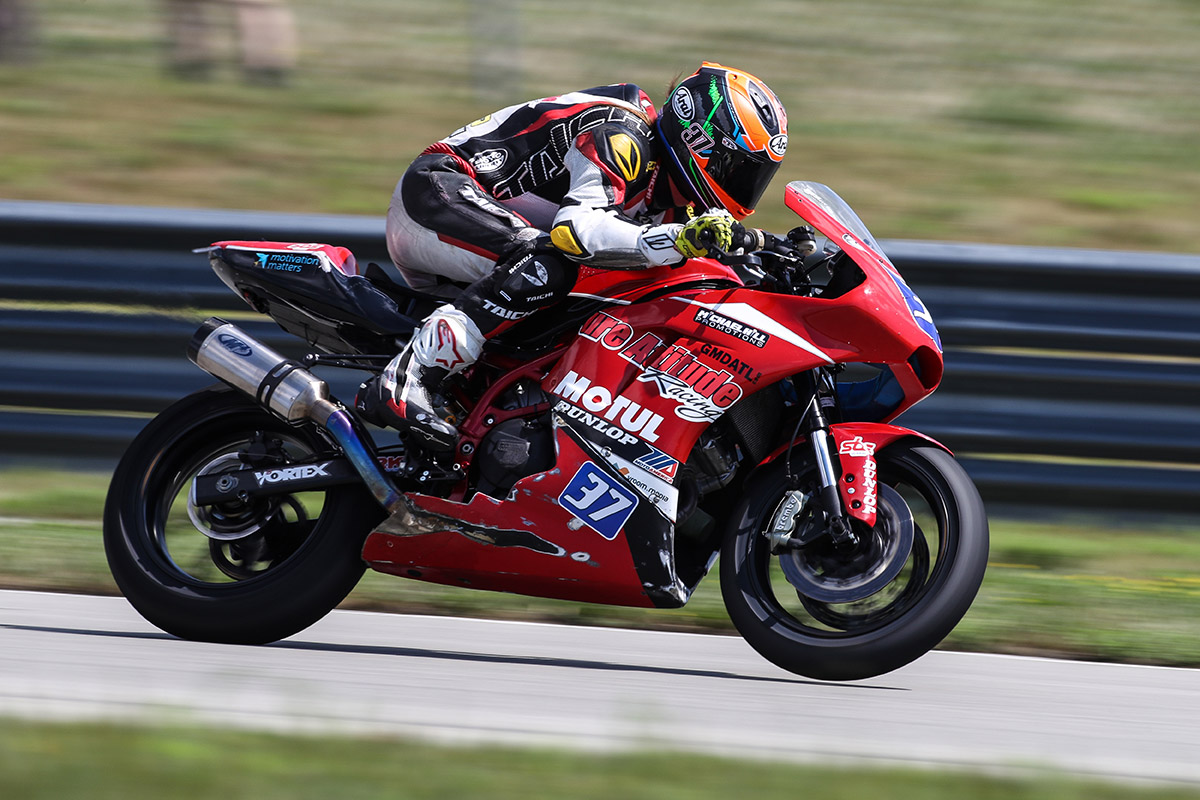 Pure Attitude Racing picked up plenty of points in the latest round of the 2021 MotoAmerica Championship at the Pittsburgh International Race Complex this past weekend, with all four riders, Liam MacDonald, Trevor Standish, Austin Miller and Nate Minster, once again in action in the Twins Cup and Supersport series.

Solid qualifying by all four competitors ensured that the team were once again able to leave Round 7 with a double Top Ten finish and a bagful of points in both categories. The event also saw the return of early Twins Cup points leader Trevor Standish. The #16 had missed several races following his Road America crash and whilst a technical issue forced his retirement, Standish rode through the discomfort to run strongly in the top ten prior to his stoppage.

Liam MacDonald finished P9, consolidating his overall championship position of P8 in Twins Cup, whilst in Supersport Nate Minster and Austin Miller both scored points once again on Saturday, with Nate bagging a double points finish with P13, whilst Austin’s weekend in a DNF after he was taken out by a fellow competitor.

The team now has a couple of weeks to regroup prior to the penultimate round of the 2021 season, taking place in September at New Jersey Motorsports Park.

Liam MacDonald:
“It was a great race. The track reminded me a lot of Suzuka in Japan. It is very flowing and favors smoother riders but is super intense. It was another new circuit for me and the first time that I was able to race the entire race in a group. It was a lot of fun. I know I could have finished higher than I did but it has been so long since I was in a race long fight that I was honestly just a bit rusty. I must be happy with another top ten and I am already looking forward to the next one in New Jersey. Big thanks to the team who did another awesome job this weekend.”

Trevor Standish:
“Unfortunately I made a call to change something on the bike for the race that meant we went in the wrong direction but I powered through and after almost being taken out at the start was able to run some competitive times considering my wrist is still not 100%. Sadly, we hit a small technical issue which meant I had to pit. The team did a great job and I went back out but sadly finished outside of the points. It’s a bittersweet feeling as we were strong in qualifying and I am stoked to be back on track, but we live and learn, and we move onto New Jersey ready to push again.”

Austin Miller:
“Race 1 on Saturday was decent, and we were able to finish in the points again which is always the aim. On Sunday I made an ok start and held my position but then I got hit by another rider which bent my exhaust and basically ruined the rest of the race. I did a couple of laps, but the bike was damaged, and we got black flagged. It’s annoying as once again we were looking good for points, but I am taking the positives, we were not a million miles away from the top ten pace wise for the third consecutive race which shows our progress. We will go again in a few weeks.”

Nate Minster:
“I made a good start in Race 1 but made a small mistake and lost a couple of positions. I regrouped and fought my way back into contention. We were able to score some good points and I was confident for Sunday. Race 2 went well. I ran P9 for most of the race. It was a bit lonely but then I was told at the end of the race I had jump start penalty which I don’t understand as you can see from the footage that my entire row and those ahead all moved at the same time so I don’t agree with the decision at all. Nevertheless, that’s how it is, and we have to take the positives and move on to New Jersey knowing that we were once again well inside the top ten and not far from the top 6 or 7.”