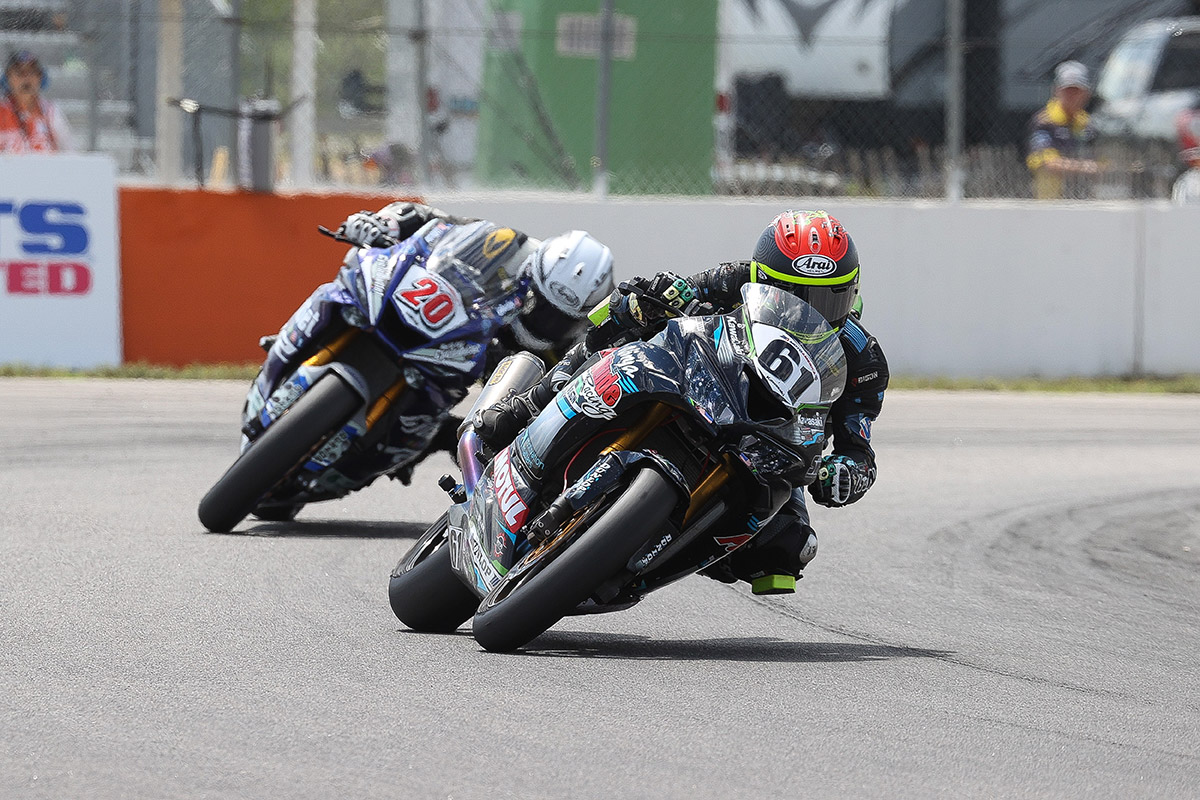 Pure Attitude Racing rounded off the sixth round of the 2021 MotoAmerica series with their three participating riders – Liam MacDonald, Nate Minster and Austin Miller – racing to another triple points score.

An additional day of testing prior to the event gave all three riders an opportunity to fine tune their machines ahead of the first AMA National Championship motorcycle road racing event to be held at Brainerd International Raceway for seventeen years!

Sole Twins Cup representative for the team Liam MacDonald ran a strong second on the opening day of on track activity before qualifying a superb seventh on the grid on Saturday. The opening race of the weekend didn’t quite go to plan for the #37 rider who crashed out whilst fighting for the top six in the early stages. He bounced back to finish a solid seventh on Sunday.

In Supersport it was Austin Miller who shone in qualifying, the #61 taking ninth on the grid, his career best grid placing in the category. Team mate Nate Minster, who took a heavy tumble in qualifying, secured P10 ahead of the two sixteen lap encounters.

A double DNF on Saturday was disappointing but both riders put Race 1 behind them to secure a double Supersport points score on Sunday. Nate achieved a season’s best of seventh, whilst Austin recovered from a heart stopping out of the seat moment on lap one to equal his best result of the year in eleventh.

The team move on to Pittsburgh for Round 7 of the MotoAmerica series in a fortnight, buoyed by the front running pace shown by all three riders, and hopeful that the event will see a racing return for Trevor Standish, who injured himself at Road America earlier in the season.

Nate Minster:
“Race 2 was way better than Race 1. I got a good start but took a while to settle down. I dropped back a bit but was able to claw my way forward as the race went on. It was my home race and whilst it would have been great to get a double points finish, we were able to end the weekend with P7 which is the best we have done all season. We can move on to Pittsburgh with new confidence that we are going in the right direction. Thanks to the team who did an excellent job as always!”

Austin Miller:
“Race 2 went really good. Starting from P9 on the third row I had a little bobble off the start and almost went down at Turn 3 after a few guys got a bit loose. That pushed me back, but I was able to find my rhythm pretty quickly and by the end of the race was lapping as fast as the guys in the fight for eighth. I equalled my best result in Supersport which is encouraging and shows that we are now consistently fast enough to fight for the top ten. After qualifying so strongly it was a bit disappointing to not make it out for Race 1 but that’s racing, and we will regroup and come out fighting at Pitt Race.”

Liam MacDonald:
“I have mixed feelings about the weekend. It started really well. I was P2 in Thursday’s test but then had a spill in qualifying but was still able to make it onto the third row of the grid. I had another crash in Race 1 and so Sunday’s second race was about bringing it home. The team did a fantastic job all weekend, they have been amazing and really supportive, and I know that we will be able to put on a good show in Pittsburgh in a couple of weeks.”