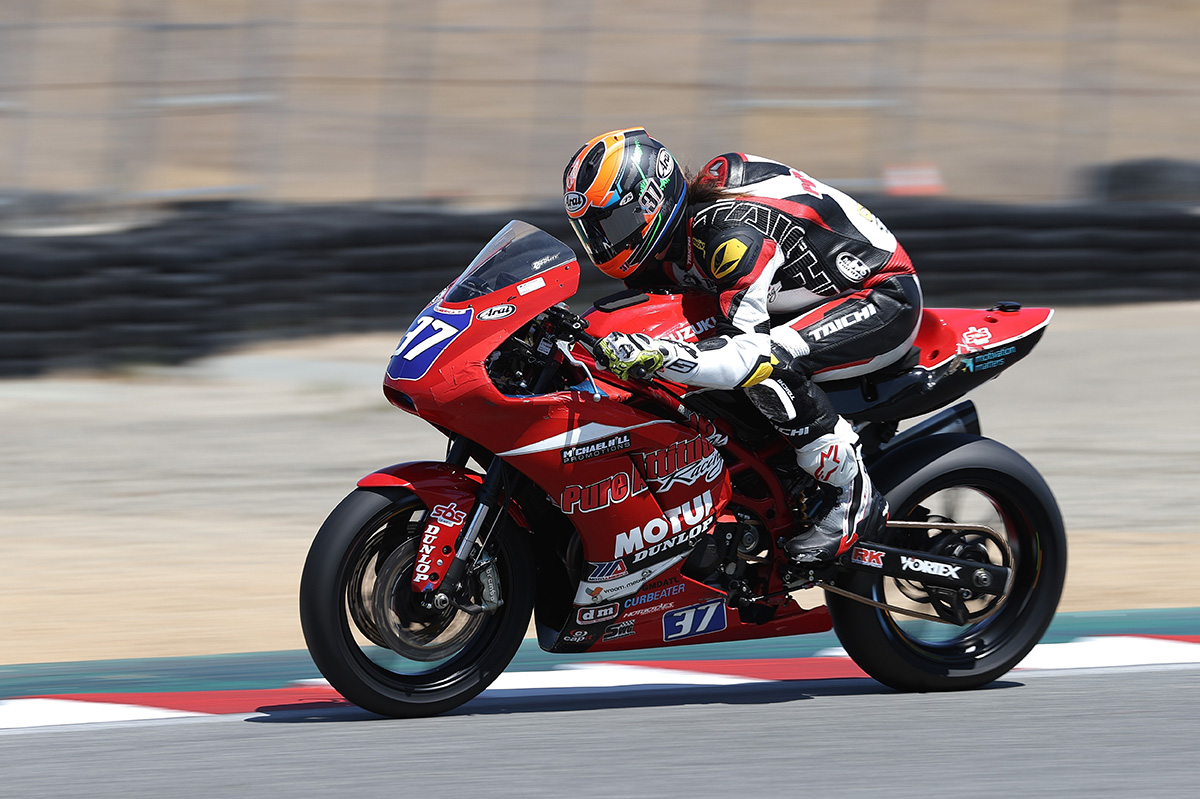 The latest round of the 2021 MotoAmerica series took place at the iconic Laguna Seca circuit, home of the famous Corkscrew, this passed weekend, and Pure Attitude Racing was once again in the mix throughout, thanks to their competing riders Nate Minster, Austin Miller, and Liam MacDonald.

With tens of thousands packing the venue, the team, who were once again on track in both Twins Cup and Supersport, also took part in the first ever Party at The Podium on Saturday evening, entering the #MotoAmericanIdol contest as a group – with hilarious results.

The Twins Cup category had only one race with Liam MacDonald the team’s sole entry following Trevor Standish’s spill at Road America. The flying Kiwi as he is affectionately known rode well. Improving his lap times by over two seconds from Friday to Saturday to finish a more than respectable ninth on his first visit to the Californian Circuit. He remains the only ‘rookie’ in the series to have finished inside the Top Ten in every race he’s finished this season – an impressive statistic.

Liam MacDonald:
“I started ninth and finished ninth. It took me a while in the race to find my rhythm and that cost me time in the beginning. I don’t know why but I felt like I wasn’t hitting my marks and that stopped me from potentially finishing higher, but that’s racing, and it can happen sometime. Able to set my fastest laps in the last laps which the team and I were happy with, we found a really good direction with the bike. It was a bit of a lonely race, but it was another top ten which is really positive. I am looking forward to Brainerd in a few weeks which is a circuit not many people have been to. A big thanks to the team – see you at the next one.”

Austin Miller:
“It was another great opening race for me. I made a good start and as everyone went to the inside I went around the outside. I rode my own race and was able to stick with the group. This meant that I was in a position to pick them off one by one and I took P12 in a photo finish on the last lap to take my second-best result in MotoAmerica Supersport. Race two wasn’t the result I wanted but I was able to drop lap times and went faster. I lost grip towards the end of the race but overall, I am happy with my performance this weekend and am looking forward to Brainerd.”

Nate Minster:
“Race 1 was a struggle, but I managed to dig deep and take the last point. Race two was a pleasing step forward. We found the issue that had been affecting us all weekend and I was able to improve my lap time quite a lot. I made a good start but faded a bit towards the end. I’m happy though as we now have the right direction, and the next race is my home race so see you all there.”