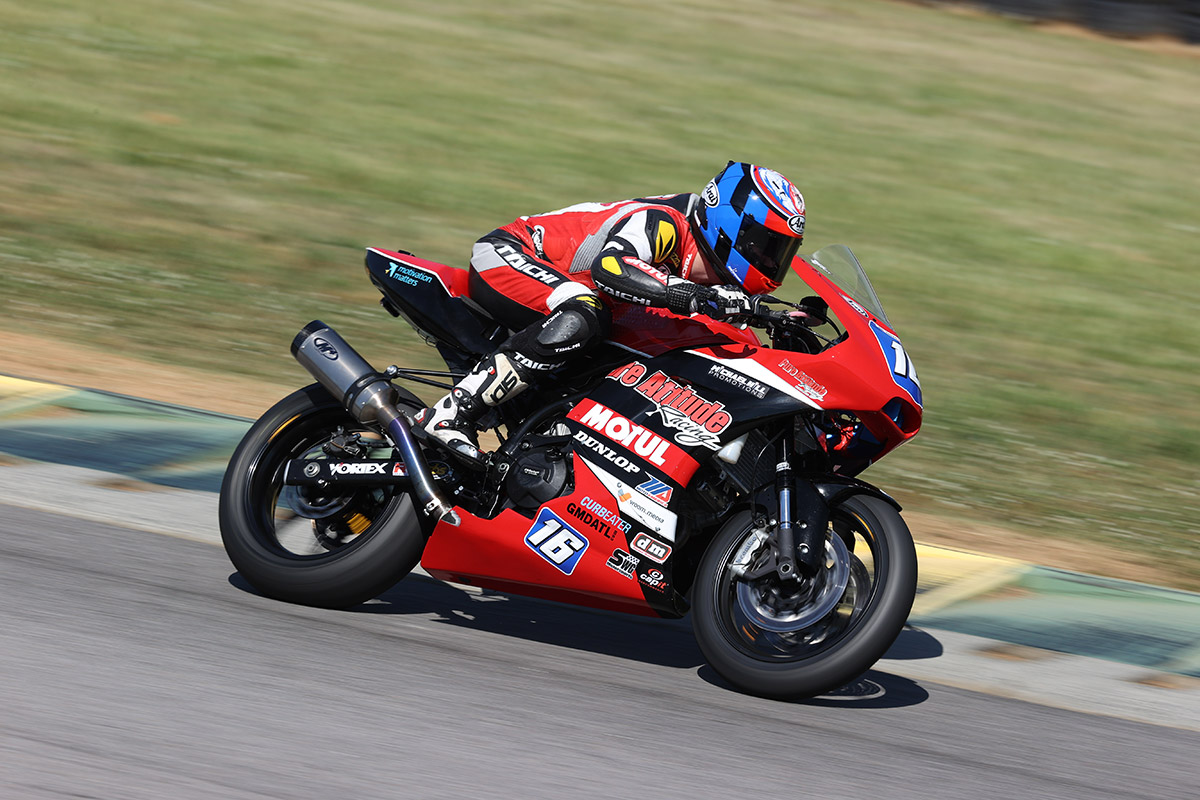 Pure Attitude Racing enjoyed another successful weekend in the latest round of the MotoAmerica championship with all four riders achieving points scoring finishes for the second consecutive event.

Buoyed by their front running pace in the Twins Cup season opener Trevor Standish and Liam MacDonald were once again in the mix, both riders bagging a double top ten finish. Trevor taking a sixth and a fifth to remain second overall in the points classification, while Liam took a tenth and ninth place finish to consolidate ninth overall in his debut season of racing in the US.

In Supersport both riders, Nate Minster and Austin Miller overcome small issues to salvage 12th and 15th respectively at the flag in race one on Saturday, with Austin racing solo on Sunday following an incident that saw Nate Minster take a tumble through no fault of his own. Miller raced to fourteenth and his first double points finish of the year.

Trevor Standish:
“I made a good start in Race 1 and was leading but got shuffled back a bit early on. I was holding my own but then ran into some rear grip issues which prevented me from pushing as hard as I knew we could have. It was a solid Saturday and good points for the championship. Race 2 was a nice step forward. I was leading again for a lap and was able to hang with the lead group before arm pump meant I faded a little. Fifth and still second overall in the points is a great result and I am ready to race again at Road America in a couple of weeks.”

Liam MacDonald:
“Race 1 went really well. I had a much better feeling and was able to settle into my rhythm more quickly than at Road Atlanta. I was able to lap consistently but it was tough with my arm pumping towards the end. VIR is really physical. I am really proud of my race and of the team for giving me such a great bike, and for rebuilding it after I stepped off in Q1. Mentally it was the best I have ever felt, coming back from a crash, and getting a good result and it’s all down to the team. I couldn’t ask for a better bunch of people to be with. Race 2 went even better. I got a lightning start and was running fifth. I felt really good. I lost the rear and the front on the same lap but saved it and was able to bring it home for my fourth points finish in a row!”

Nate Minster:
“Qualifying was ok. We had some pretty big suspension issues, but the team worked well, and we were able to improve although Q2 was still a little rough. I was suffering some arm pump which meant it was hard to hang onto the bike I was determined to give it my all in the races. Race 1 was actually pretty good all things considered. We still don’t have the ideal setting, but I was able to lap consistently and got some points. In the Warm-Up we wanted to test some things. We got down to pace right away but then I was taken out by another rider in the last five minutes of the session. I decided not to ride as I wasn’t feeling the best. The team fully supported my decision, and we will come back strong at Road America.”

Austin Miller:
“We finally got the bike straightened out for Q2 and it went really well. It was a hard day of working on things, but we made the race which was the important thing and the target. The focus was to push for points in the race and I was able to achieve that. I needed that after all the problems and missing most of the first day as I was beginning to lose hope. I was able to finish fifteenth after gaining eight places from where I started. I made an ok start and made a few mistakes but was able to bring it home. Race Two went great. I made a good start but around lap eleven my arm started to stiffen, and it was difficult to ride as I wanted. I almost got one more position on the last lap, but I ran out of time. We made a step from Race 1 and it was two races in the points for the first time in my Supersport career so I can move on to Road America happy.”