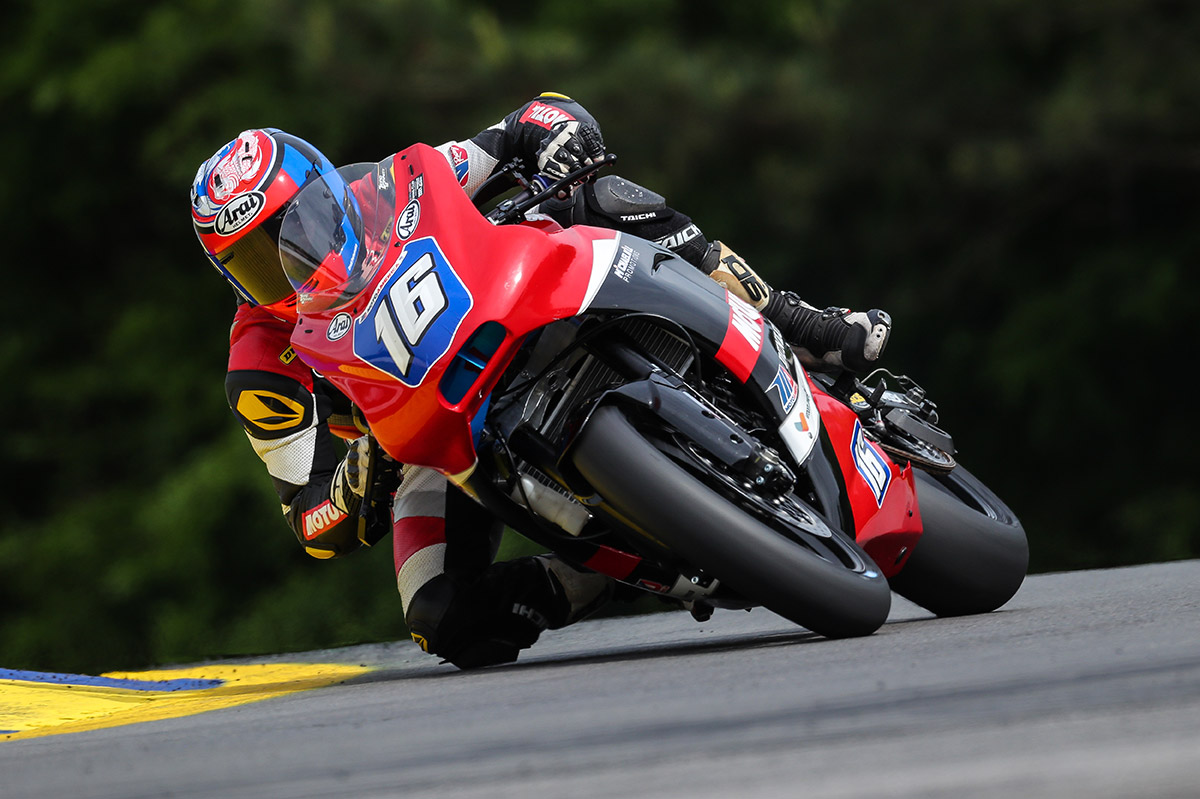 Podium, a brace of top tens, points for all four riders – MotoAmerica started in style for Pure Attitude Racing in Atlanta

Pure Attitude Racing made their intentions clear in the opening round of the 2021 MotoAmerica series at Road Atlanta this past weekend. Trevor Standish raced to a maiden Twins Cup podium, his team mates securing solid race finishes in both Supersport and Twins Cup too!

The weekend began in style in Gainesville Square where all four riders attended the annual ‘Season Kick Off’ Party, one of the team’s machines was also on display.

When the on-track action got underway on Friday, riders Nate Minster and Austin Miller made great strides between sessions in Supersport, the pair showing great speed and potential on the opening day of season. Both riders improved further in final qualifying, although Nate Minster took a spill which ruled him out of Race 1. Twins Cup duo, Liam MacDonald and Trevor Standish had an up and down day one but bounced back in style to qualify strongly ahead of their two races.

Looking back at the races – two in both classes – the team are delighted with the performance of all four riders who each ensured a bag full of points as the season heads to Virginia International Raceway in a couple of weeks.

Trevor Standish began his title campaign in Twins Cup with a fighting fourth on Saturday, which he followed up with a stunning ride to P2 on Sunday, the #16 leaving Road Atlanta with the championship lead! Liam MacDonald showed that he has lost none of his speed, despite not racing competitively for over a year. The Kiwi, who is making is MotoAmerica debut this season, finished tenth and seventh, declaring himself content with the weekend, and delighted with how welcome Pure Attitude Racing have made him feel.

Austin Miller opened his points tally with a career equalling best result of twelfth, the #61 Kawasaki rider running strongly in race too, before a small issue meant he had to retire. Nate Minster, who had initially qualified on the third row of the grid, secured the team’s third top ten finish of the weekend, taking eighth in a confidence building ride on Sunday.

Trevor Standish 4th / 2nd:
“The season got off to a great start. I finished fourth on Saturday which was a career best finish in the Twins Cup class for me. I made another good start in Race 2 on Sunday and was running a strong fifth. I was hanging with the lead group and I noticed some smoke along the main straight. I had made a couple of mistakes, which was lucky in hindsight as there was a three-rider crash into Turn 1. I knew it must have been fluid, so I was extra cautious. We regrouped and I made the hole shot and was able to pressure Teagg Hobbs throughout. It was a great feeling to lead the opening lap and a half and to be able to fight for the win. I made the fastest lap of the race on the last lap and am leading the Twins Cup championship too which is unbelievable, I actually have no words. The next round is at one of my favourite circuits – VIR – and I hope we can keep the momentum going. I want to thank the whole Pure Attitude Team for all their hard work this weekend, especially Kent and AJ, and thank the fans for going so crazy at the podium!”

Liam MacDonald: 10th / 7th:
“Q2 I was frustrated to only get one clean lap, but the main thing is that I made the grid after the crash in Q1. For the race, from lap seven to eleven I was in survival mode. I couldn’t feel my arms or my hands. I could barely twist the throttle. I lost a couple of places on the final lap but that’s racing. I learned a lot and to finish my first race in the US in the top ten is more than I expected. I am really stoked with how Race 2 went. I’m upset that I made a mistake on the last lap but that won’t happen as I get more used to the bike and I understand how to race a Twins Cup bike. We aren’t quite there with the perfect set-up, but we aren’t far away, and the potential is there. I need to improve my physical fitness, I haven’t raced for over a year, but I am confident that we can run in the top six pretty soon. I am so happy for my team mate Trevor and so happy for the team. I already feel part of the Pure Attitude family and I cannot wait for the next race.”

Nate Minster – DNS / 8th:
“Qualifying went well, especially on Saturday when I was able to improve my time by over a second. I crashed heavily though towards the end of Q2 and despite the best efforts of the team I was unable to make the grid for race one. We were able to race on Sunday and whilst I didn’t feel the best after my Q2 get off, I was able to make a good start and was chasing for seventh. I ended up eighth, which when you consider what happened and the work, we had to do to get back out there isn’t too bad.”

Austin Miller: 12th / 15th:
“Race one went great despite a rough opening lap on the initial start. I shifted into third gear and got on the gas a little too hard out of Turn 10 and as I crested the hill towards the final turn the front wheel went skywards. Luckily, I was able to get it stopped but was dead last after going through the gravel. The next lap there was a red flag which really helped me out. My initial jump on the restart wasn’t great but I avoided another incident at Turn 1 and was able to bring it home in the twelfth position and I was able to improve my lap time again, in race conditions. Race two there was another red flag unfortunately when I was running in the top fourteen. I was able to run in the points in the restart but with three laps to go I had a small problem with the bike. I lost power and had to reset it which worked but the issue happened again, and I had to retire to the pits.”